Rosemary Mountain’s life has been characterized by exploration – geographical, cultural, scholarly, and creative. Her musical output is varied in style and ensemble, including electroacoustics and mixed works as well as occasional collaborations with other art forms (film, dance, theatre), and has been performed in Canada & Europe.

Early exposure to Indian music led her to appreciate subtleties of timbre, temperament, rhythm and form which drove her to expand her listening repertoire far beyond the Western canon, and eventually led her to develop analytic and pedagogical tools which can reflect this diversity. Her fascination with polyrhythms and complex 20th-century layered works prompted her Ph.D. in music at the University of Victoria in 1986 which led to an ongoing involvement with auditory and temporal perception research.

Her interest in links with visual arts led to her inventing and developing (along with Harry Mountain, sculptor and historian) a platform known as IMP-NESTAR which facilitates music and multimedia analysis and terminology, and helps communication between potential collaborators in multi-media artworks.

She has taught composition and related courses at the University of Aveiro, Portugal and Concordia University, Montreal, but is currently living in a quiet town in Nova Scotia to finish writing a few books and devote more time to composition. New projects include a string quartet and sets of pieces for beginner string players along with some short electroacoustic works incorporating sounds from nature and from her collection of instruments – including violin, santur, kamancheh, and a collection of bells.

The book title refers playfully to those courses like Conversational Spanish or Conversational Mandarin which are designed to introduce people to the words and syntax of a foreign land – in this case, the study of music – in a way that will enhance their ability to converse with the locals.  Over the years, while looking for information and inspiration for composing and teaching, I have wandered into many different areas and discovered fascinating research relating to music – analysis, perception & cognition, music in multimedia contexts, electroacoustics, communication, performance studies, non-Western theories, etc.   But it seems that these discoveries are not easily shared between groups.  This book is designed to help correct that situation, by identifying some of the basic problems – from information overload to specialist jargon – and proposing a few solutions.  Those solutions range from the somewhat whimsical one of a new breed of researcher I denote as the “Conversational Musicologist” who will act as interpreter between areas, to the more practical one of stimulating reflecting on some main terms and concepts which are often used too carelessly – like assumptions about pitch, notation, and history.   As the subtitle “a composer’s perspective” suggests, the book is partly a collection of musings, but I also argue that the artist’s insights are crucial – as are those of performers, teachers, critics, etc. – and that the doors of musicological research need to be pried open to absorb a wider range of means for communication.   I have tried to structure the book so that it can be easily browsed by non-specialists as well as musicians from various areas – it might make a good resource for students in a variety of courses.

Yes, it’s my first book – and hopefully, the first of several!  The next book should be out within the year – it’s about musical time, which has been my primary research over the decades as I try to refine my skills at creating illusions of multiple strands of sounds evolving at different rates.  Having Conversational Musicology already published makes the second one easier to write and hopefully to read, as this first one provides the context for my arguments and style. 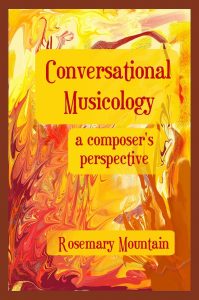 The e-book, which I self-published, is available from various sellers – Amazon, Kobo, etc.  This link connects directly to all of them, so the buyer can choose: https://books2read.com/u/mgzdRx   At the moment, there’s also a link right on the front page of my website: armchair-researcher.com

We were often missing the cultural activity of Montreal and the increasingly frequent long stays in Europe, but since 2020 especially, it has been wonderful to wander around in a big old house (with wonderful acoustics) on a big lot in one of the most pandemic-free areas of the world.  The slower pace of life and especially the soundscapes are much more favourable to composing than the frantic pace of urban academia: songbirds, wind in the trees, the occasional train whistle and odd metallic sounds coming from a nearby factory, while just a short drive away I can listen to the sounds of the waves and breathe the ocean air.  Of course, we are currently out of reach for friends who were planning to visit from other provinces and countries, but hopefully that will change in the near future.

I’m always composing little ideas as they circle in my head, and hope that they might coalesce into something!  I have been approached by a trio to compose something new, and I’m very excited about that but apparently not supposed to begin until they receive a grant to pay me – so I’m trying to focus on a string quartet which I started last fall.   I am also working on assembling pieces for beginner string players, as I know there is a real gap in the repertoire for training performers for our contemporary works – I hope to submit something to the Calgary Contemporary Showcase call published recently.

No – I think it is typical of many composers not to have just one favourite, and I often love one piece and not another by the same person!  And there are so many of us now, I am quite ignorant of some of the newer or less heard voices.  I’m always interested in music which seem to be doing something I haven’t heard before – new forms, textures, treatments of sounds, or simply an articulate personal expression – so when I reflect on the names that come to mind first, they are often pioneers, or people whose works I happened to hear live, years ago: Anne Southam, Rudolf Komorous, Jack Behrens, Daniel Scheidt, Gordon Monahan, Arsenio Giron, Gilles Gobeil, Marjan Mozetich, Henry Kucharzyk, Hugh LeCaine, Maurice Blackburn, Sofie-Carmen Eckhardt-Gramatté, James Tenney, Barry Truax, Gayle Young, Micheline Coulombe Saint-Marcoux, Alexina Louie, Melissa Hui, Monique Jean, Cléo Palacio-Quintin, Christian Calon….  And I was quite influenced by the music and thinking of Murray Schafer, for whom I worked as copyist and occasional collaborator for many years.

As I am only peripherally involved in the academic world now, summer and winter are equally suitable for long uninterrupted days of composing and writing – bliss!  A couple of the song-birds are arriving back already, and I can hear them from my studio. 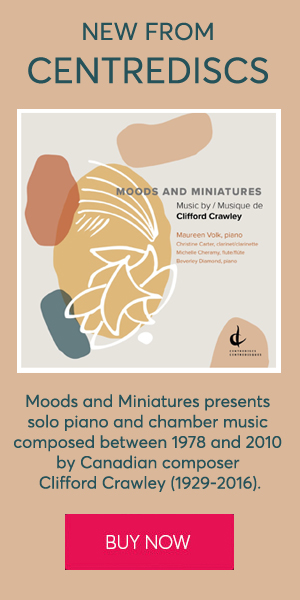